Nick Clegg: It’s really important to help children get the best out of their school years

In an interview with First News, Nick Clegg discusses the importance of free school meals for school pupils.

From September all schoolchildren in England aged between 5 and 7 will receive a free school lunch.

In the interview Nick, also discusses the coalition and why Scotland should remain part of the UK.

An extract from Nick's interview is below. 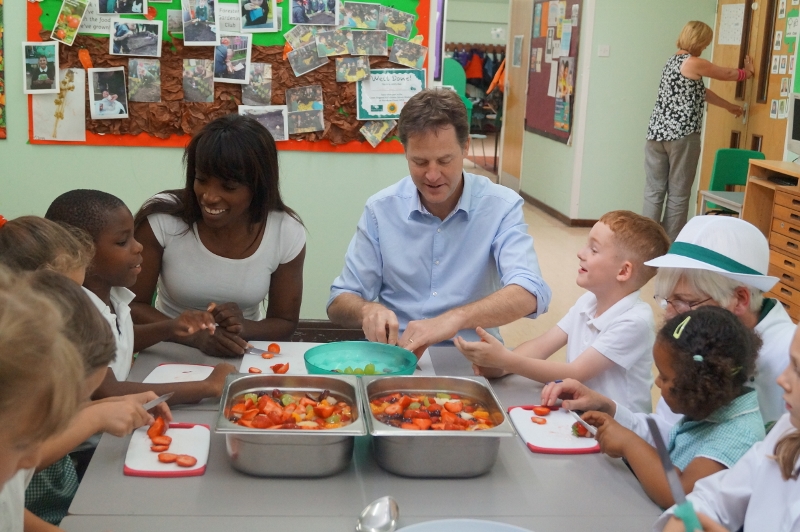 Why do you think free school meals are important?

I just think that having a healthy meal at the middle of the day makes just a dramatic difference to the ability of boys and girls to concentrate in the classroom in the afternoon. If you eat badly at lunchtime, you start to feel a bit sleepy and your mind wanders in the afternoon. I just think it's really important to help children get the best out of their school years, to make sure they don't feel either hungry nor not properly fed in the afternoon. It also, of course, will save Mums and Dads a lot of money.

Were schools given enough time to get ready?

Oh, yes! This is something that we've thought about carefully. There might be some schools who are going to find it tricky to get everything ready in September, but the thousands of schools who are getting ready - I'm absolutely confident that the vast majority of them are on track.

What inspired you to get into politics?

I'm 47 now. In the 1980s, there was a very dog-eat-dog, quite unpleasant, quite ungenerous mood because of the Conservative government of the time. I just thought then, and I think now, that we can do much better as a country.

Most politicians - even ones I don't agree with - are in politics for the right reasons, because they think they can hopefully do something to leave things a bit better than they found them. You can change things in politics, but it sometimes requires a bit of pushing and shoving.

Why did you join forces with the Conservatives?

The country was in terrible, terrible trouble. It was terrible. Memories are short - it was a horrible time for everybody. There was a real fear that the country was going to topple over. Every night on the news, you saw television pictures of riots on the street of Athens.

I thought it was really important to make sure that that didn't happen in this country. No-one won the general election, so the only way we could do that was by teaming up with another party. The only party we could team up with was the Conservatives because, in order to get things done, you need to have enough MPs together in order to decide things in Parliament. A Liberal Democrat/Labour coalition just didn't add up.

I'm very, very proud that the Liberal Democrats did that. It has cost us a lot of support in the short term, but I'm very proud that we put the country before the party. Now, there's a greater sense of optimism about what youngsters can go on and do in life, which there wouldn't be otherwise.

Will the UK be worse off if Scotland goes solo?

I think it would be a real tragedy if Scotland was to leave the United Kingdom. I don't have a vote in the referendum, but I just desperately hope that Scotland will remain a part of the United Kingdom. I just think, in this day and age when there's so many things that we can't do on our own … you can just get a whole lot of things done together that you can't do apart. We are better together. We can do more together than if we're apart.