Increasing the Personal Tax Allowance will be a red line for the Liberal Democrats in any coalition negotiations, Nick Clegg has announced.

Nick Clegg said the Liberal Democrats would not support a Labour or Conservative Government if they did not commit to raising the income tax threshold. 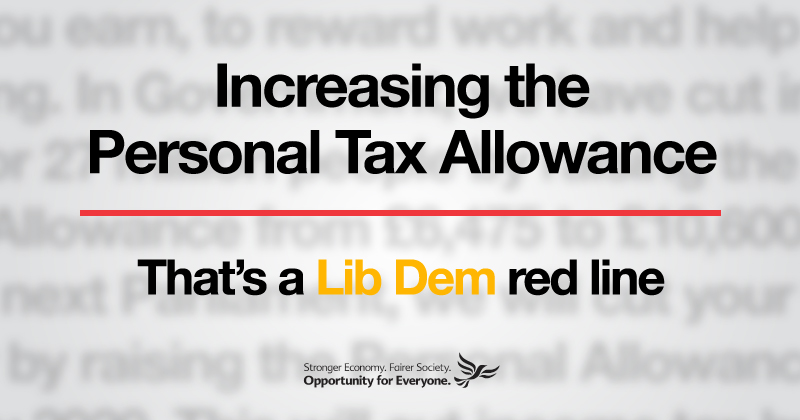 The deal-breaker comes as millions of people will feel the benefit of the latest rise in the Personal Allowance in their pay-packets, which has delivered a £825 tax cut over the parliament, worth £70 a month.

This red line is underpinned by three key principles:

Increasing the Personal Tax Allowance will be a red line for the Liberal Democrats in any coalition negotiations, Nick Clegg has announced.

It is the third red line set out by the Liberal Democrats in recent days, after protecting the education budget and holding a 'stability budget'.

"The Liberal Democrats have delivered the biggest set of tax cuts in generation for working people, cutting taxes for millions of people by £825. Everyone who receives their pay packet today will be paying £70 less in tax a month because there are Liberal Democrats in government.

"We are making increasing the Personal Allowance to £12,500 a 'red line' for any coalition negotiation. That way the British public know that no matter the colour of the government, if the Liberal Democrats are a part of it, their taxes will be cut.

"We had to fight tough and nail with the Conservatives to deliver tax cuts worth £825 to 27 million people. We won't let them prioritise any of their other tax gimmicks ahead of delivering another £400 tax cut for people on low and middle incomes.

"During this General Election, there is only one party with a track record of promising tax cuts on the front page of its manifesto and delivering them straight into the pockets of low and middle income families up and down the country. That is the Liberal Democrats."

"Raising the personal allowance was a Liberal Democrat red line in 2010, which we delivered despite David Cameron telling the nation it was 'unaffordable'.

"Today we go further, announcing a new red line that means anyone wanting to work with us in government will have to commit to raising the income tax threshold to £12,500.

"Just two days ago the IFS described Labour's proposed 10p tax rate as having a 'miniscule effect'. Compare that to the millions of workers who will be getting their pay cheques today and will be £70 better off a month, thanks to the Liberal Democrats in government.

"We've delivered tax cuts of £825 and, back in government, will cut taxes by a further £380, creating a stronger economy, a fairer society and opportunity for everyone."